About the UF/IFAS Aquaculture Program

The mission of the IRREC Aquaculture Program is to conduct research relevant to the aquaculture industry in Florida and the southeastern United States as well as to interpret the results and to provide information to current and potential aquaculture producers.

Additionally, education of students, graduate students, and post-docs is a crucial part of the mission. The IRREC Aquaculture Research and Demonstration Facility and the associated programs are led by Dr. Cortney Ohs. Dr. Ohs is a faculty member at Indian River Research and Education Center and in the School of Forest Resources and Conservation Program in Fisheries and Aquatic Sciences. The original 26.5 acre site and its four 0.25 acre lined ponds and retention pond served as a shrimp demonstration project and were designed by individuals who are recognized on the site history section of this website. Dr. Ohs greatly expanded the site to include a new greenhouse, a new hatchery building, and a large water treatment system. Dr. Ohs leads the research and extension programs to identify aquatic organisms with aquaculture potential, to conduct research to define how to commercially produce them, and to improve production methods of organisms currently cultured by increasing efficiency and profit potential.

A Brief History of the IRREC Aquaculture Demonstration Project

The UF/IFAS Indian River Research and Education Center Aquaculture Demonstration Project began in the early 2000s with investigation whether marine shrimp could be cultured in low salinity pond water as found in inland Florida farming.

Agricultural land in the region was abundant at the time and the primary crop, citrus, had faced increasing challenges due to weather, diseases and pests. Florida food production is bountiful because of yearlong warm weather and also due to the Floridan Aquifer, a mineral-rich, natural supply of freshwater easily accessed by growers statewide. The thought was that a live shrimp research program was needed to determine the economic and production viability for high-value Penaeid shrimp. The concept developed from conversations with then UF/IFAS Associate Professor of Agricultural Economics, Ferdinand Wirth, and longtime cattle rancher and citrus grower Frank “Sonny” Williamson Jr. At the time, Williamson operated a catfish farm in Alabama. Wirth and Williamson believed a new industry might provide a profitable alternative for the region’s many agriculturalists. To assist in their efforts to gain funding and to plan the shrimp production test site, Wirth enlisted LeRoy Creswell, a longtime aquaculture expert who at the time served as a UF SeaGrant regional aquaculture extension agent. Wirth and Creswell wrote two successful grants for funding with the Florida Department of Agriculture and Consumer Services, Division of Aquaculture, and gained additional funds from six sources. 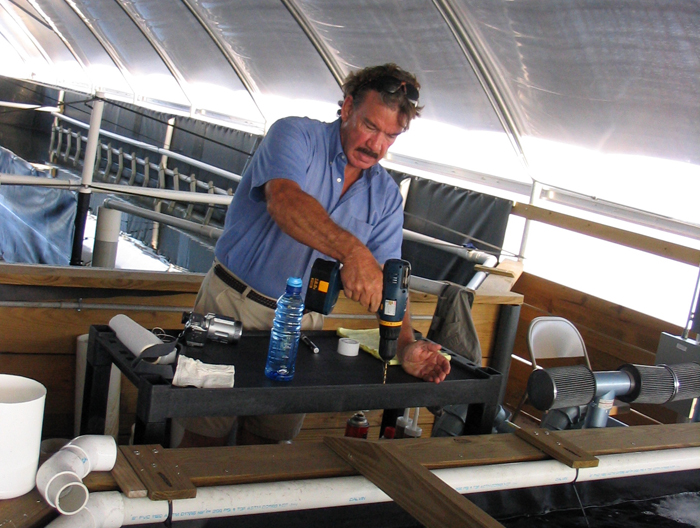 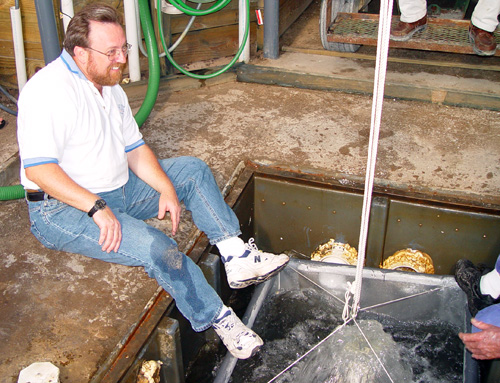 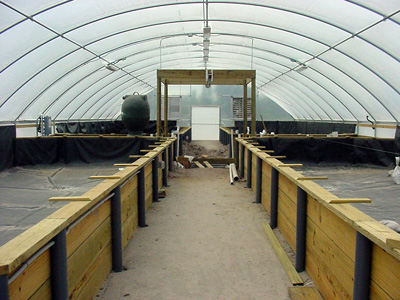 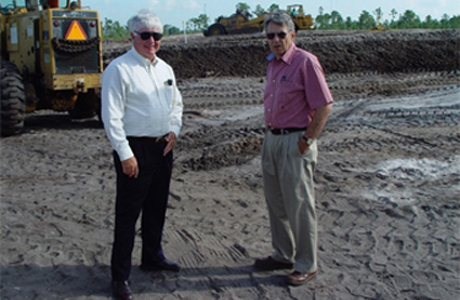 We thank the following early supporters for what became the UF/IFAS IRREC Aquaculture Demonstration Project:

With funding gained in 2002, Wirth appointed a project manager, Durwood Dugger, to assist in the design and development of the site. Dugger, a career-long aquaculture consultant representing Biocepts Inc., brought expertise for design and implementation of the first demonstration site. Together, Wirth, Creswell and Dugger developed the site design. It featured four grow-out ponds, 8-foot levee ponds, a large retention pond to receive stormwater for shrimp harvests and shrimp. The design included a greenhouse nursery, recirculating tanks, and post-larvae shrimp and a recirculating water system. An all-site operations back-up generator system ensured security and continuity for the operation. Williamson and his farm crew utilized their equipment to perform much of the original site construction, including earthmoving for the greenhouse and water retention pond. The crew also constructed the greenhouse. IRREC stakeholder Travis Murphy excavated and graded the ponds and their precisely sloped bottoms. The ponds were then lined -- two ponds with plastic donated by Mark Yunker with Yunker Plastics, Inc., and two ponds with synthetic rubber provided by John Heathcote with Firestone, Inc.

A paddlewheel circulates water in Pond 1

In 2003, shrimp production began with shrimp post-larvae inside the greenhouse. Once grown to size, the researchers placed the mature larvae in the four raceway ponds. Electric paddlewheels churned the ponds to maintain oxygen in the water. Then, in 2003, the first shrimp harvest took place. In 2004, following a second harvest, UF/IFAS officials invited leaders from the FDACS department of Aquaculture and local law and policymakers to join them for the Open House & Shrimp Boil, at which attendees noted the high-quality shrimp and the potential for aquaculture research at the UF/IFAS facility.

Following two years of research, the early research collaborators completed a 140-page final project report, “Commercial Scale Penaeid Shrimp Demonstration in Inland Freshwater Systems”, authored by Wirth, Dugger, and Creswell (pictured below), was submitted to FDACS on December 15, 2004. Wirth published a journal article on marketing shrimp, and Jennifer Clark, a UF/IFAS College of Agricultural and Life Sciences MSc student, used the economic data for her thesis and in a subsequent publication. Important facts emerged from that first research effort. Of note, the researchers identified the viability to raise shrimp species, Litopenaeus vannamei, a dense and delicious shrimp variety. Research findings were that the shrimp could be viably produced and would garner high economic gain from sales to a local and enthusiastic public. Advance sales of up to 2,000 pounds of shrimp at higher than retail value was possible through digital communications, they found. However, the researchers identified the need for a heated greenhouse to produce two harvests a year for economic viability. Another finding was that a local feed source was necessary to ensure successful operations. In summary, the early researchers recommended the FDACS fund additional research to support the business model and to advance an aquaculture industry that would foster employment and fresh food production in the state. 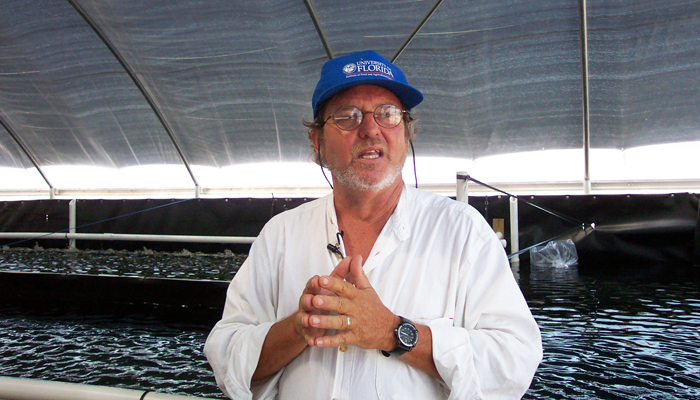