Periphyton is a complex assemblage of algae, cyanobacteria, microinvertebrates, their secretions, and detritus attached to submerged surfaces. Periphyton communities - along with sawgrass -  are some of the most abundant communities in the Everglades, and represent more than half of the primary production. As such, a goal of Everglades restoration projects is to reestablish calcareous periphyton in areas where it is absent, or where it has been damaged.

Why is Periphyton Important?

Most periphyton in the Everglades is calcareous, due to abundance of the limestone (calcium carbonate) bedrock underlying the Everglades, and from surface water inputs containing high cation concentrations.

Periphyton is crucial, and a fundamental part of the food web as the primary food source for small consumers - including fish and invertebrates. It affects many biological communities and ecosystem features including nutrient concentrations, soil quality, and dissolved gases.

For example, periphyton provides dissolved oxygen through photosynthesis to sustain much of the aquatic life in its surroundings. Furthermore, periphyton is important because  it responds rapidly to changes in the environment. Periphyton is also an indicator of changing conditions.

Periphyton is present in areas that are marginal to the Everglades Agricultural Area and Everglades wetlands. 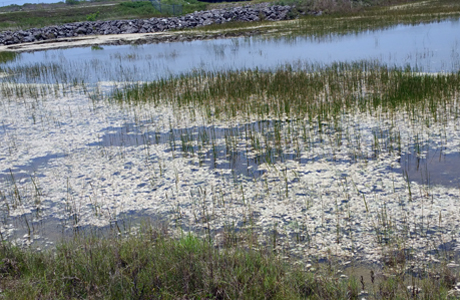 periphyton on stormwater that has run into a Florida wetland 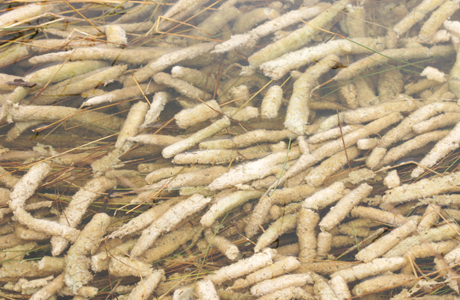